November 26, 2022
9:00 pm
BRUGES, BE
DUB REVOLUTION
Dub Revolution
Event
Indica Dubs
BUY TICKETS
FACEBOOK EVENT
MOA ANBESSA
Moa Anbessa is a collective of experienced musicians and vocalists from Venice, Italy, which also houses their own label and recording studio. With a career spanning nearly three decades, Moa Anbessa is an established name in the dub, roots and reggae scene. Their music has been picked up over the years by big names like Jah Shaka, Aba Shanti and Channel One. The crew, with Buriman, Imo and Prince David in their ranks, will bring their dub vibes to Bruges for the first time during Dub Revolution!
INDICA DUBS
Sukh, the man behind Indica Dubs, came into contact with roots and dub at a young age in his hometown of London. Inspired by the energy within the dub community, he decided to produce himself. In 2010, at the age of 20, his first vinyl was released on his own label. His tunes were quickly picked up and he was asked to make dubplates for influential sound systems such as Jah Shaka, Channel One and King Shiloh. In 2017 Sukh started with his Indica Dubs sound system, with which he brings exclusive tracks from the Indica Dubs studio to the public and entered into collaborations with the best roots and dub artists who walk around this sphere.
Nowadays Sukh works from Ghent, where he launched his own event Ghent Dub Club in 2018. More than 50 releases and countless collaborations later, Indica Dubs is a big name in the international roots and dub scene. A welcome guest at Dub Revolution!
FORWARD FEVER
Forward Fever has not been idle since their inception in the late 90s. They traveled around Europe and shared the stage with a whole host of artists from the reggae and dub scene. In addition to their DJ sets and radio work, they are also productive in the studio. Their first single, ‘Rasta We Rasta’ featuring Danny Red, Idren Natural and Jamma Dim became an anthem in the sound system world. Since then, Forward Fever has released a ton of other tracks on labels such as AbabaJahnoy, Indica Dubs, Woodland Records, Vibes Generator, Reservoir Dub and their own Forward Fever Recordings. They have been co-organizer of Dub Revolution for many years.
• • • • • • • • • • • • • • • • • • • • • • • • • •
<DUB REVOLUTION>
Cactus Muziekcentrum and permanent partner Forward Fever have been scouring the stratosphere since 2010 in search of the latest revelations of all things dub. Just as happy Dub Revolution drives back to the origins, evolutions and influences of the dub scene. Parties that not only target your hips, but also your conscious mind! The success of Dub Revolution gave us inspiration for the new Roots Revolution series, in which we now accommodate all live sounds from the broad spectrum of roots, reggae and dub.
Share: 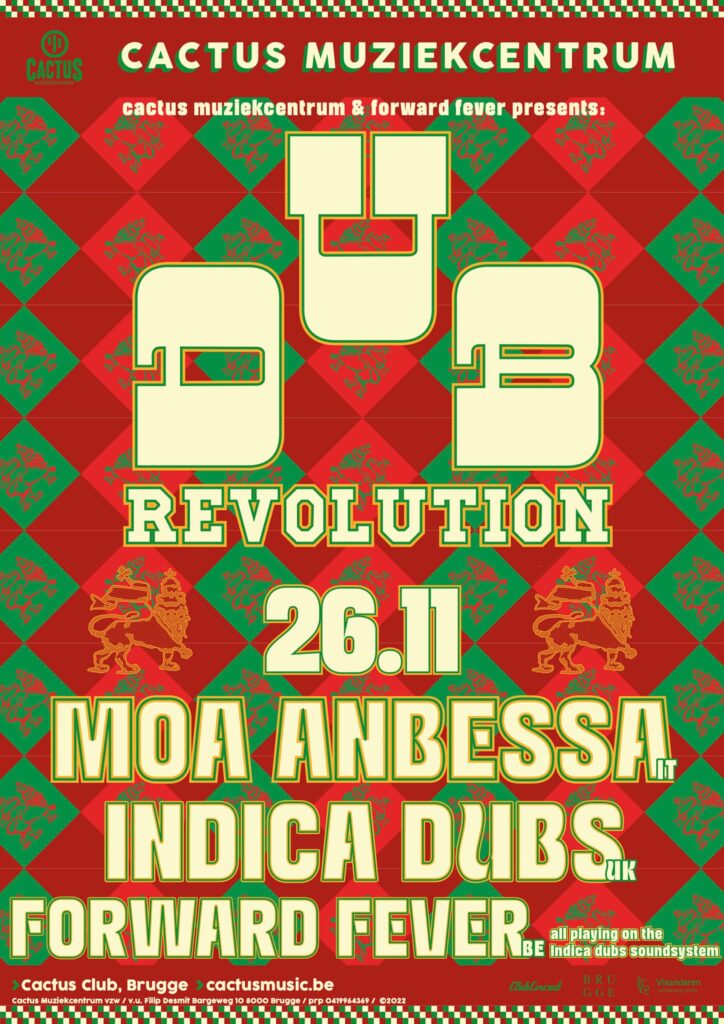